Ibex Spring Ghost Camp, Death Valley, CA. It will likely be just you and the palm trees in this isolated southeast corner of Death Valley. The Saratoga Hills, Ibex Dunes and Black Mountains serve as backdrop for the walk across barren desert on the old Ibex Spring mining road. Deep washes vie with surviving bits of pavement for a schizophrenic road condition. Sometimes you need a Jeep; sometimes a Honda Civic would be fine. There’s no road symbol for that. It’s hard to tell if you’re getting closer to the ghost mine camp that lured you out here, the scarce and tantalizing images online posted by others who have fallen down the desert rabbit hole or if it will remain forever around the furthest bend. Intellectually you know you’re moving forward. Metaphysically, you’re stuck in the geologic time period when that huge talc belt, the reason for the mines, was formed.

Keep going; it’s worth it.

What the Ibex Spring mining camp lacks in rip-roaring history—saloon shoot-outs, land swindles, dubious ladies—it makes up for in buildings that are still around for us to check out. By the 1940s when the camp was built wild speculation had largely been replaced by a more prosaic approach—mine steadily for what’s there instead of the fabled ores dreamed up over a whiskey fire. Mining companies went for talc instead of gold. Talc fever just doesn’t have the same ring.

Don’t get the wrong idea. There’s magic here, for sure. Cottonwood trees shade a lonely cabin. Palms flash like penknives against the mountain signaling another cabin, two old foundations from an older mining era and an unmarked grave. 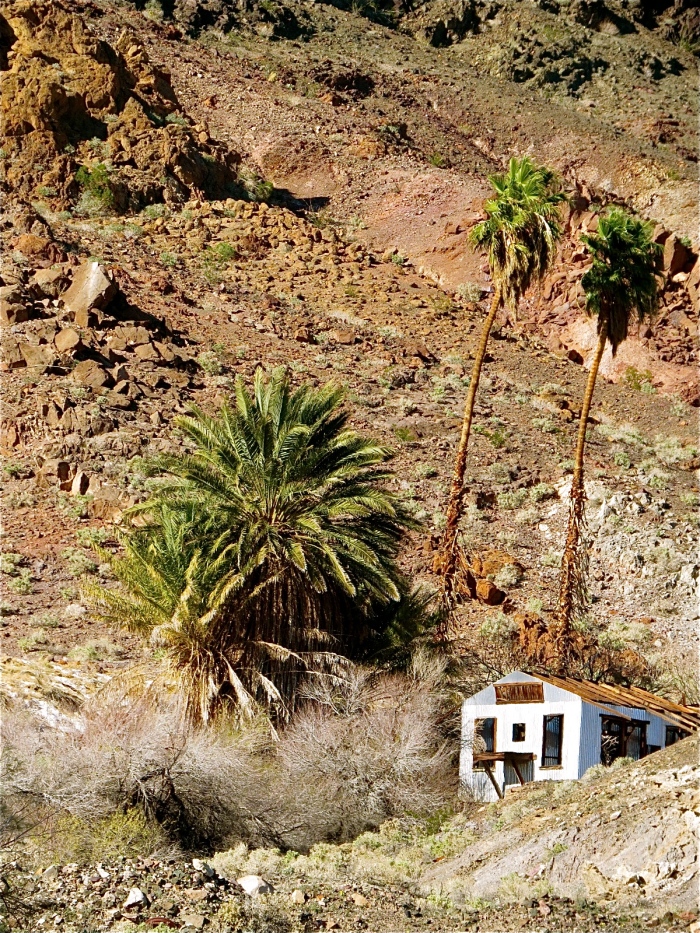 Look for the springhouse full of water, the chaotic crisscrossing of pipes on the ground. A shower house allowed the miners to clean up after a long day in the mines in preparation for a long night in the middle of nowhere. 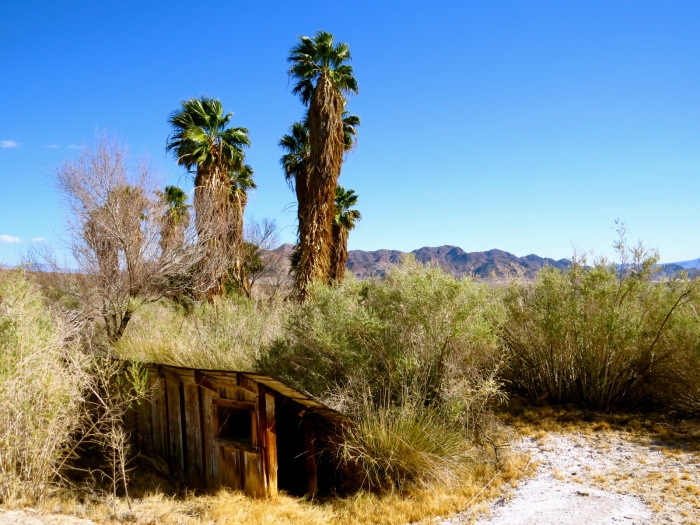 Leave time to check out the mining sites. The Monarch-Pleasonton Mine is a dead giveaway with its white talc tailings. The Moorehouse mine is further up the road. Scanning the stark landscape it’s hard not to notice any small anomaly, to wonder what it is. A natural aberration in the geology? An Indian stone wall? Hidden mine tunnel? My imagination runs wild. Maybe those fire dreams never die.

4 thoughts on “Surviving in a Post-Gold Fever World”