Blair Valley, Anza Borrego Desert State Park. For anyone who thinks of the desert as a monotonous and endless stretch of sand and ugly rocks: this is for you. The Anza Borrego Desert State Park is three hours southeast of Los Angeles, in the backcountry of the San Diego backcountry. It’s the perfect Southern California weekend trip, and a bunch of friends and I drove down the last weekend in March to check out the wildflowers. But there are two kinds of years in the desert: years where the desert is a wildflower wonderland and years where it’s not. In wildflower wonderland years the cacti embrace their alternate personas, flash it out there in hula-hoop layers anticipating Easter and chocolate, hot cross buns and everything delicious done up in woven baskets. In other years the desert only just perks up a little. 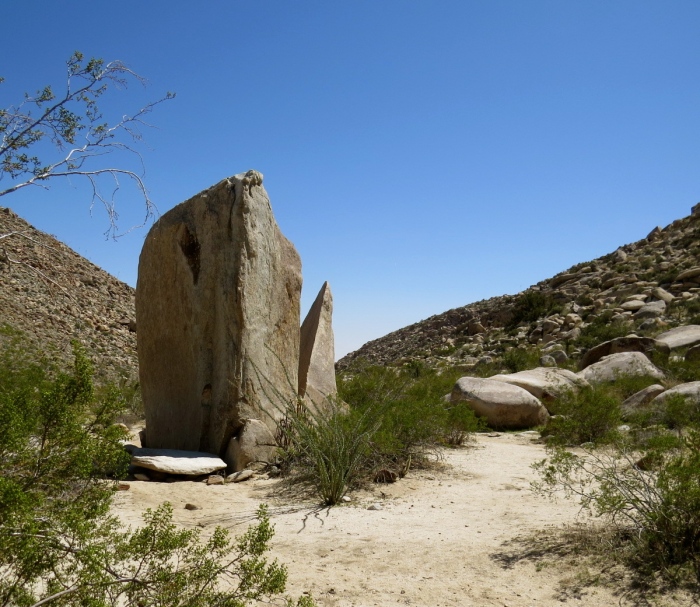 This turned out to be a non-wonderland year, but there was still plenty of magic to be had. The temperatures were perfect; each wildflower we saw was an event, and there were trails and hot springs to track down. The Anza Borrego is a vast place, the largest state park in California so it’s good to have some kind of plan. You can appreciate the expanse, but miss out on the gems if you try to see it from the car. 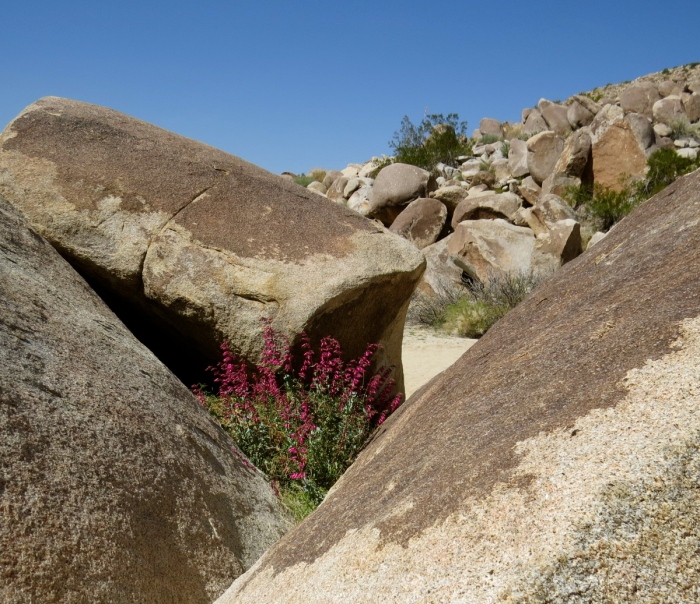 Blair Valley Camp: You’ll miss it the first time. And when you find it you’ll wonder if you’re in the right place. Blair Valley Camp isn’t so much a campground as a state of mind, a place to find your own place. It’s dispersed camping. There are no asphalt parking lots or showers. Turn off from the Great Southern Overland Stage Route and drive along the dirt road that winds between the rocky hills and the dry lakebed. Look for a spot that looks like sometime, maybe, someone had camped there before. Go for it. It’s yours. 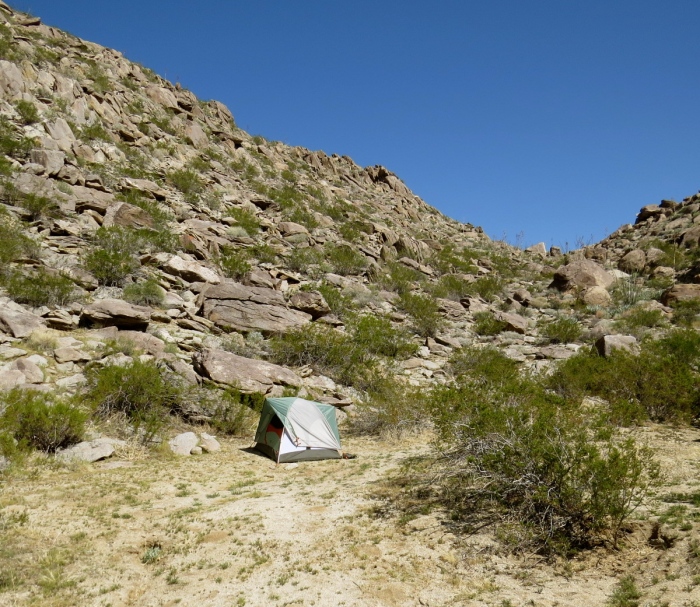 Marshall South Homestead/Ghost Mountain hike: In 2010 I made my first trip down to the Anza Borrego. My destination was Ranchita, a post office and general store trying to lure in tourists with its 11-foot Yeti statue. It worked, and I ended up there on a hot afternoon. The Yeti was pretty great and all, but it only took about 3.5 minutes to admire and pose next to it for pictures. The real gold was inside the store when we happened upon a dusty DVD. The Ghost Mountain Experiment, the woman behind the counter explained, was about a bohemian family from the ‘30s who had moved off the grid to a rocky mountain close by. Even though the phrase didn’t exist then the sentiment did. We could get there easily, she told us.

The mile of switchbacks up Ghost Mountain will still bring you to a crumbling adobe complete with bed frame and cistern system. For 16 years Marshall and Tanya South along with their three children lived an existence that must have been grueling although they put a brave and cultured face on it for the public, writing about their daily life for Desert Magazine in a philosophically couched chronicle of primitive living including sketches and poetry. It’s hard to fathom, making the trek up, why they chose that particular spot. Maybe it was a desire for extreme seclusion. Maybe it was the view (on a clear day you can see the Salton Sea). Maybe they were confused. 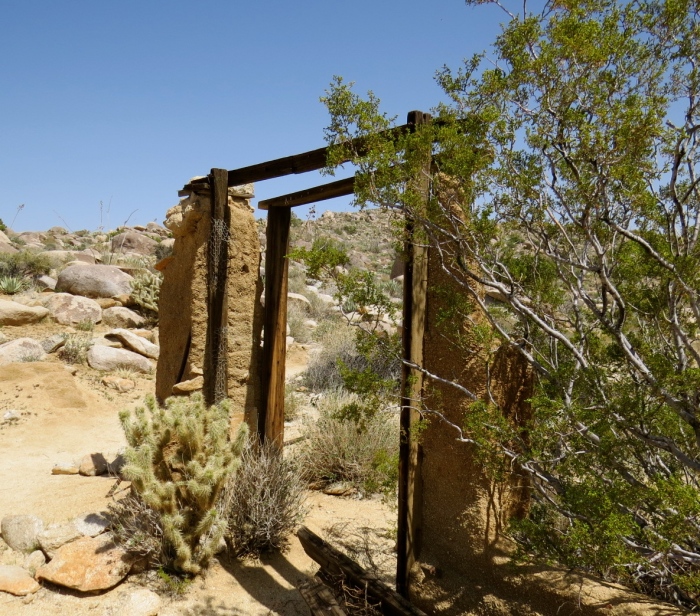 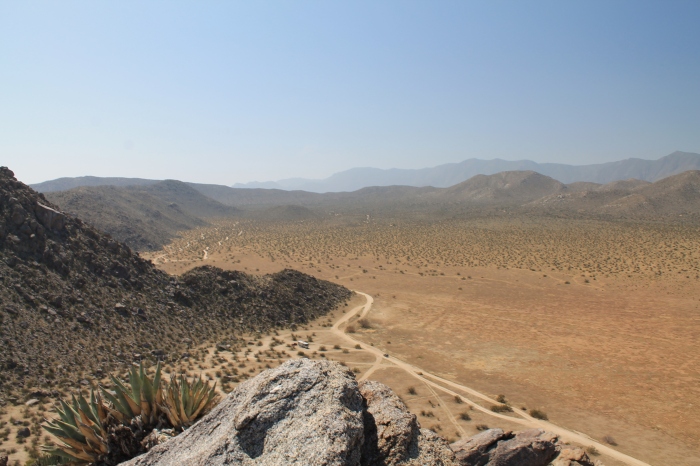 Morteros and Pictograph trails: Before you step onto these trails, pick up a pamphlet. Read up. You need this information to cue you in to whatever traces are left of the Kumeyaay settlement here. We saw pictographs. We saw smooth morteros in the rocks for grinding seeds and grains. We saw rock formations that on second glance sold us on a sweat lodge theory. Pay attention because it’s all easy to miss. There are way more remote places that require a lot of research and piecing together—Indian Hill with its elusive Blue Sun and Solstice Caves, for example. But this is a good place to start. 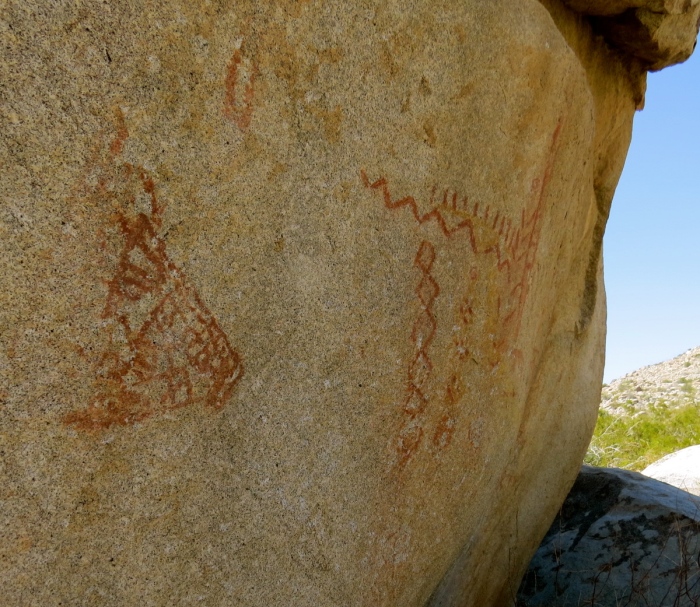 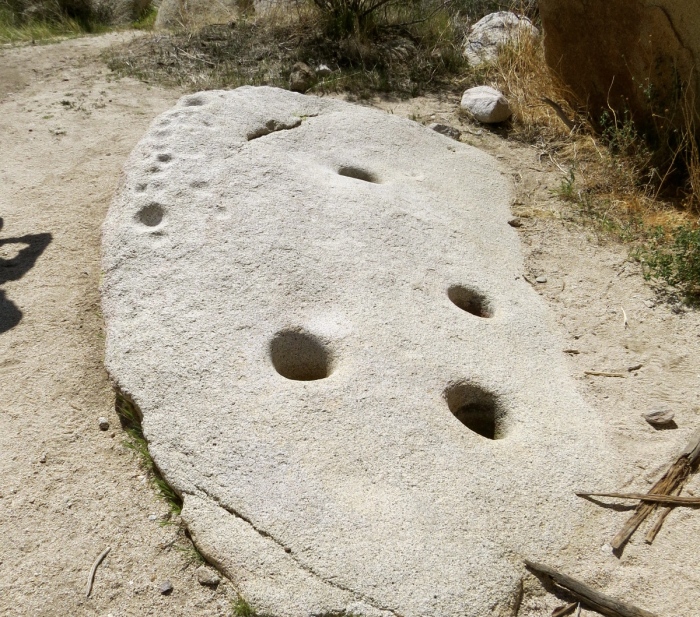 Agua Caliente Hot Springs: At this point in the trip, you’re hot and dusty. Even if you don’t think you need a bath, your campmates might. I’m going to break my rule to never write about hot springs and tell you about the Agua Caliente County Park. People who are real hot springs aficionados guard their soaking places carefully lest they be overrun and trashed. Trust me, I’m not giving away any secrets here. This is a developed county park with car camping, and there are kids and tourists everywhere.  The springs are three concrete pools fed by natural hot springs and varying in temperature. You don’t go for the solitude. That’s what your campsite in Blair Valley is for. You do go for the luxury of soaking in the perfect temperature water while looking out at the rocky hills where the temperatures are cranked up to buzzard altitudes and the sand is a canvas for jackrabbit trails. You leave, refreshed. Your campsite, the one you chose because it spoke to you, is waiting. 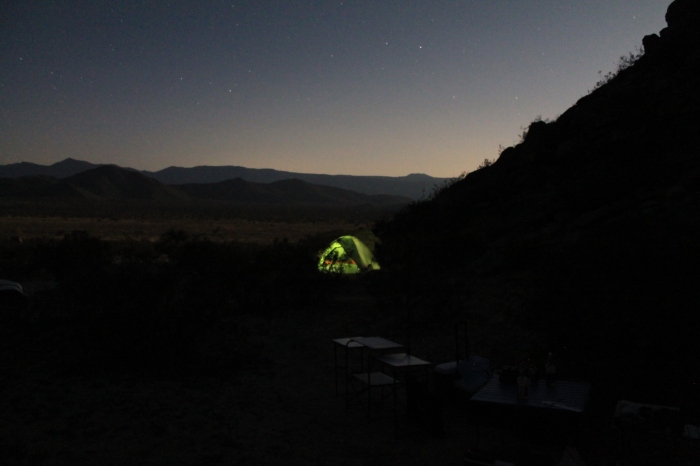