I’m with my friend, and he’s never been here before. We’re taking a field trip to the land of wreck and ruin. We pass the towns–Desert Shores, Salton Sea Beach, Niland, Bombay Beach, North Shore. We stop and take pictures, feeling vaguely guilty because here are people’s lives yet we’re embarking on the tourism of decay. Maybe some enterprising person should capitalize on this, give guided tours. “That’s where the boat mechanic used to be. That’s where they threw the best parties with dancing and crab puffs.“ They do it in Detroit. Although here it’s really not necessary. The decay is spread out like a buffet of overripe fruit burst and smeared on a Southern California sidewalk.

A big group of people, probably from Los Angeles, is doing a fashion photo shoot against the blighted buildings in Desert Shores. In Bombay Beach some metaled out folks with long hair and leather pants are shooting a music video.

We walk out toward the sea, the sand made of fish bones crunching under our feet. The water is blue. It laps against the shore, as you would expect a sea to do. Birds wheel overhead, and the Chocolate Mountains preside in the distance. It’s actually quite lovely.

Before the present sea there was an ancient sea here, from back in ancient times. There were ghost galleon sightings above the desert floor and fossilized fish with legs. One day the ghostly sea flooded, with a vengeance. The Colorado River had busted out of its traces mowing down villages and Indian land beneath it. Perpetually thirsty here in the arid Southwest, we were trying to divert the river, and we lost. Or won?

It was going to be a borderline natural disaster.

The retirees didn’t know that when they sunk their pennies scrimped and saved into the neat little trailer with the buoys hanging off the picket fence and the golf cart to get around. When they bought the boats and fishing gear they couldn’t anticipate that the salinity levels of the sea would rise. They didn’t know that there was no outlet, that a cycle of over-salted belly up fish and thirsty birds drinking poisoned water would begin. When things started going downhill other people moved in. The sagging grid made for cheap living, and it became a place for castaways, people with no other options, and the few who liked the apocalyptic appeal. A social hierarchy began. 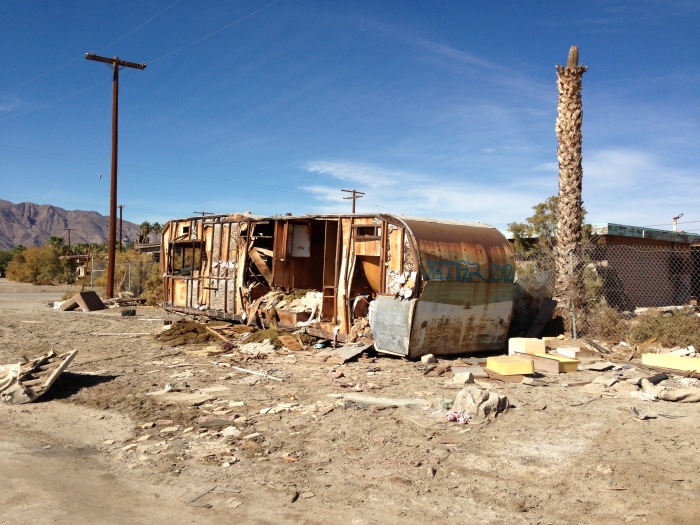 For a good look, check out the documentary “Plagues & Pleasures on the Salton Sea” narr. John Waters.

Every time I’m here I see people with a look of puzzlement and horror, carrying beach chairs, a picnic bag. They didn’t get the memo. They won’t get the joke.

Black flies keep the air abuzz in the bombed out communities. Buoys, fishnets, glass floats, burned wood signs with family names and misplaced apostrophes, picket fences, shiny airstream panels all went into the salty desert air and came out with a mouth full of desert dirt, gasping for breath, skeletons shrinking down to rusted hulls.

My friend and I take some more pictures and contemplate lunch. When another fish goes belly up, we know it’s our cue to leave. 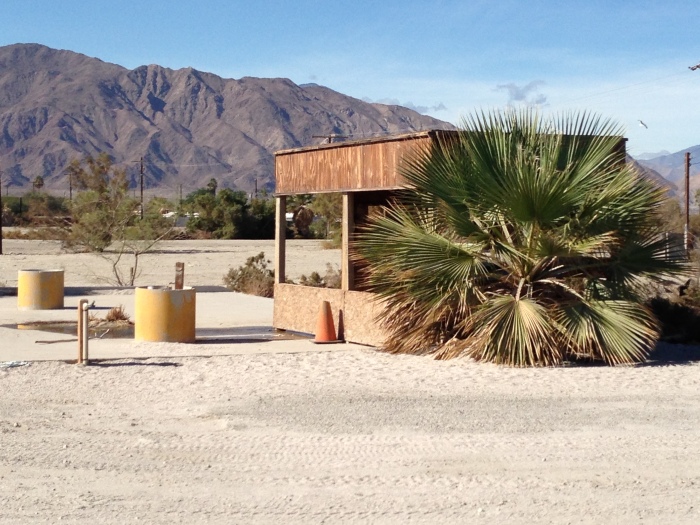 2 thoughts on “The Resort at the End of the World”